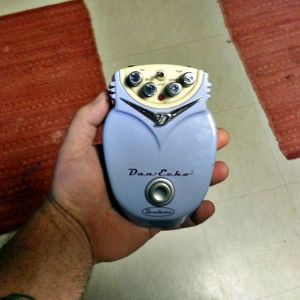 So my trusty old Danelectro Dan-Echo pedal took a crap at a gig a few weeks ago.
This was very distressing to me.
My first thought was, I’ll have to buy a new one or find something similar for slap back; but the problem is, I have a sentimental attachment to this particular pedal

You see, the reason for the sentimental attachment is that I used to have a lot of problems.
When I was younger, I always thought I’d have a career in music.
But what I really ended up with was finding out that I am a born alcoholic.
My drinking was so bad I could hardly keep a job, hardly keep a roof over my head, and was always scrounging for the basic necessities.
The only thing I had going for me back then was my guitar playing; and my drinking was so bad that it was getting hard to keep finding other musicians to put up with my baggage.
Lots of talent, but no life skills
If I made $100 playing guitar, I spent all of that and more on my various bar tabs.

Things got so bad, I quit music pretty much altogether. This was around 1997, and I was just turning 30 years old.
I sold most of my gear. I quit playing in bands for the most part, other than a pick-up gig here and there.
I got a solid job and started trying to get my life together
And the drinking was under control…for a while

But eventually, it all escalated again.
The steady job meant I had even more money to blow on my habits, but now I didn’t even have the joy of music to ease some of the pain.
During those bleak years, I just led a horrible workaday alcoholic life…

Fast forward to 2001, when things got so horribly wrong with me that I actually reached out and made an appointment at a mental hospital

I told the doc at the nut house that I was a crazy person, because even though I would tell myself all day or all week that I wouldn’t drink, I would realize at some point in any given evening that I was well along on a horrible drunken spree.
I told the shrink that only a crazy person would basically black out while sober and find himself hours later in the midst of drunken nightmare.
The Psychiatrist said…
Who knows! You might be crazy, but we won’t know for sure until we get you sobered up.

He referred me to an alcohol and addiction center, which I went to once a week, until THEY realized that once a week with them wasn’t cutting it!
They then referred me to the world famous St. Thomas Hospital (Ignatia Hall) who actually wanted to admit me immediately, but we eventually decided to try outpatient therapy first.
I spent 6 weeks at Ignatia Hall with some great people.
I learned a lot about myself. I learned a lot about addiction. I learned a lot of tools and coping mechanisms to handle life on life’s terms
I also came to the realization that I could NEVER have a drink again.
My trusty old friend, Booze, was now dead to me.
I actually went through a grieving process with this.
I had dreams about drinking. I had cravings.
I also came to the realization that I would NEVER be able to play music again.
Booze was too intertwined with the bar scene and events that a musician performs.

In fact, the reason I got started drinking in the first place was because of music.
There is no time in my life when I am more myself than when I am playing music, but the problem is that I am a born introvert. I naturally HATE crowds and hate being the center of attention.

( Now it should be said, that I actually love people (at least some of them :), I love hanging out and talking music, but large crowds make me very anxious, even if I know everyone there)

So, the realization that I would never be able to perform again was devastating.

But…living without the fear and shame and pain of a horrible alcohol addiction seemed worth the trade off
I was able to get myself a little apartment
I was able to pay my bills every month.
I picked up a nice little Ford pick up truck with low miles and was able to get financed and make all the payments (in fact, I paid that truck off 3 years later, and it was the first thing in my life that I had ever stuck to a paid off. I was a 37 year old grown man and finally had that feeling of accomplishment that other people probably take for granted when they are in their early 20’s)

But... I found myself at night, not knowing what to do with myself.
All of my previous associates were out at bars, carousing and raising hell.
I didn’t have any friends.
I’d go to Borders and buy books and magazines, and read them while I drank coffee.
I’d wander around Wal-Mart at 2 in the morning, buying knickknacks and doo-dads for my little apartment.

I finally thought, well if I can’t play music anymore in front of a crowd, maybe I could at least write and record some songs.
I bought a cheap 4 track cassette recorder and some mics and effects.

One of the effects I bought was that Danelectro Dan Echo pedal.
I bought it because it looked cool, and it had a toggle switch on it, which if you flipped it to the left, it would give you “an authentic 1950’s slap back”
I thought, who knows, maybe someday I’ll start a rockabilly band.

That pedal didn’t get much use for quite a while…

But, things started getting better for me
I made some new friends
I met a girl named Jean… who would later become my wife!
(Who knew, the guy who used to be a basically homeless drunk now has a wife and a house)

I started realizing, one baby step at a time, that maybe I could actually perform in front of a crowd again without a bunch of booze in me….
I just had to get through that initial horrible anxiety of being in a crowd and being the center of attention…
I realized that once I start playing I go into a zen state and don't notice the crowd as much (usually anyway)

In the fall of 2007, I saw an ad in the Youngstown Ohio Craigslist…”rockabilly band looking for a guitar player”
At last!
I would finally be able to use my little cheapo Dano pedal that I bought on a whim while desperately trying to lead a sober life

That band eventually turned into a band called RumbleDaddy; with the great Rockabilly Ray Kollar on the drums and Fred Purnell on Upright Bass

I did almost 200 shows, recorded 3 albums, along with numerous rehearsals and sessions with RumbleDaddy and my Danelectro Dan-Echo pedal.

RumbleDaddy eventually disbanded, like bands do; but since then I’ve kept moving forward with my Flat Broke One Man Band, and my Danelectro Dan-Echo Pedal
I’ve done another 150 plus shows, and have recorded a lot of songs with it anchoring down my tone with the Flat Broke One Man Band
I’ve taken it as far as Philadelphia PA, to the east, and all the way to Denver CO and Sturgis SD to the west.
I’ve put another 50 or so shows on it with my friends The Living Deads, and recorded tracks for them with it as well

When I bought this pedal way back around the turn of the century; one of my gear snob friends made fun of me and told me it was a piece of crap (I only paid $29.99 for it back then)
But it has been reliable, it’s handled like a tank and been a real champ.

So….when it finally took a crap on me at the Strand Theater in Fremont Ohio…I felt much sadder than I anticipated, which got me thinking about everything I mentioned above.

But the good news is…I took my trusty old Dan Electro Dan-Echo pedal down to the Ohio Music Shop in Kent Ohio, where The great Jeff Seefong, grabbed it, slapped it on the counter, had it apart in no time, scrounged up the right parts and got it back to me good as new, in about 30 minutes or less!

I can’t say enough great things about Jeff and his store!
Jeff also has a company called Old School Effects which makes killer vintage inspired pedals and stomp boxes.
Be sure to stop by the next time you’re in Kent Ohio and check out his place.
It’s a real music store run by guys who LOVE music and COOL vintage gear
They even have a pretty fantastic stage and do live shows there.
I’ll be playing there myself in the next few months... So stay tuned for that announcement

See you all soon!
~SRT